This photo of the Eaton-Twining monoplane 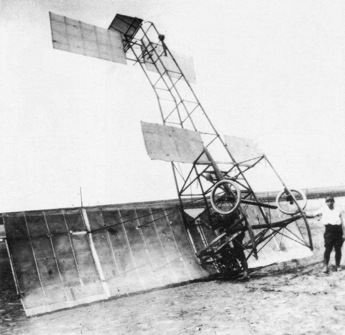 appears in two books about the 1910 Los Angeles meeting and a modern postcard as the Gill-Dosh machine. It is obviously not, since the Gill-Dosh was a biplane Curtiss copy... Today I stumbled over a photo of the same crash in an old issue of Aircraft. It was taken at the Los Angeles Motordrome in August 1910 and shows the plane "after making a successful flight", according to the caption! The article goes on:

"This machine is a biplane of the Bleriot type, except that it has sliding planes at the wing tip for securing lateral stability. This machine has been making small jumps for a couple of weeks. It is equipped with a Ford automobile engine of 22 1/2 h.p., four-cylinder, water-cooled. The power plant weighs 200 pounds, and the whole machine 700 pounds, including the aviator. Warren S. Eaton was driving the machine when it went over on to its nose. It was running on the ground at the rate of 25 miles per hour when the front axle broke. As the tail was high in the air at the time, the tips of the skids stuck in the ground, and it ended up as shown. Mr. Eaton was thrown into the framework, but escaped unhurt."
Top
Post Reply
1 post • Page 1 of 1

Users browsing this forum: No registered users and 2 guests