Hi everybody,
The next meeting to cover is the 1910 Los Angeles Meeting. This meeting was pretty well documented in the old aviation magazines and a couple of books have been written about it. However, there are still some gaps to fill:

1. I haven't seen any good photos showing the Gill-Dosh (or Gill-Dosch according to some) biplane, obviously a Curtiss copy with a different engine. The best I have are these two:
http://latimesblogs.latimes.com/.a/6a00d8341c630a53ef0120a7a5ea35970b-pi
http://latimesblogs.latimes.com/.a/6a00d8341c630a53ef0120a7a5ea31970b-pi
Do you know any better photos? There's nothing in the Hatfield or Pauley books. The monoplane standing on its nose, which is identified in both those books (and a couple of other places) as the Gill-Dosh, is actually the completely different Eaton-Twinings.

2. Strangely enough, since it was one of the major players, I have never seen a sharp photo showing the V8-powered Curtiss "Rheims Flyer" in its entirety at the LA meeting. Do you know of any?

3. Some of the Curtiss planes apparently carried race numbers on the rudders. These don't match the numbers given in the program. Willard's "Golden Flyer" carried both number 1 and number 9. Hamilton's plane carried number 7. It seems no other planes at the meeting carried numbers. Do you know the explanation?

Any help is much appreciated!
Anders
Top

Do you have this book?

[/URL]
It has several good pictures of Curtiss machines as well as a few mislabeled pictures that I believe are the Gill-Dosh aeroplane. The first picture is on page 53. It shows Hillary Beachey sitting in the Gill-Dosh machine.

[/URL]
There are a few things about this airplane that distinguishes it from a genuine Curtiss. The first is the wood supports for the front of the seat. A Curtiss' supports are steel tube. The steering wheel is mounted on the apex of two control columns, a real Curtiss would be mounted on one column. The engine supports also appear to be mounted too high. Here are what I believe are actually pictures of the Gill-Dosh machine from the same book, notice the engine and fuel tank don't match Curtiss practice.

There are several pictures of the Rheims Racer in the book I mentioned. As far as numbering, I have seen pictures of Willard's plane with 9 and 1. These pictures may or may not be from the same meet. I am discovering that there is a lot of mislabeling of photos from the pioneer era. Many Curtiss copies are labeled as Curtiss aeroplanes. I have never seen Hamilton's plane with a 7, do you have a photo? I have had a small Curtiss obsession for many years and have collected books, photos and plans over the years. If you want to explore Curtiss further, I would suggest trying to get a hold of WW1 Aero magazines. There was a series of articles written in the 90's by David Holcmbe. His articles appear in numbers 135, 143, 144, 146, 148, 152, 155, 158, and 161. Issue #144 covers the Rheims Racer specifically. There are pictures available on the internet if you look for them.

Sharp eyes, there!
Yes, you are right, those photos must be the Gill-Dosh. I didn't look so closely, since I searched for photos of the whole plane for the "Planes" page. Looking for further differences I find the wing tip skids and the wider, lower radiator.

I have those WW1 Aero articles - great stuff!

The #7 of Hamilton is this photo, from the Hatfield book (and the "Planes" page): 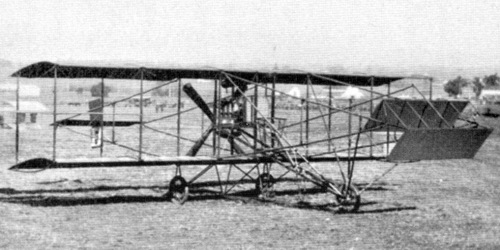 However, looking at it again, perhaps it is a 5 and not a 7?

Thanks for the feedback!
Anders
Top

I never noticed the number on the rudder of the Hamilton plane. Good eyes.

As far as numbering, I have seen pictures of Willard's plane with 9 and 1. These pictures may or may not be from the same meet.

Do you have any idea of what meeting Willard's Curtiss might have had #1?
Anders
Top

I've looked at all the February 1910 LA meeting photos I could find and I don't believe the Willard #1 photo was taken there. I haven't seen any other photos with similar bushes and trees in the background. 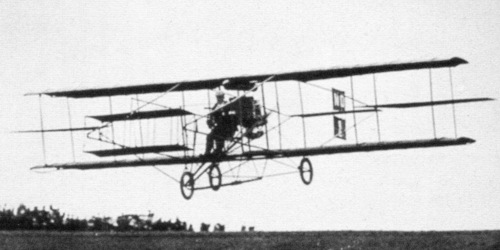 According to the book "Orville's Aviators" in the chapter on Howard Gill, the original Gill-Dosh airplane was sold to and flown by Thomas Benoist. I Googled Thomas Benoist and found this picture that is supposed to be him flying the Gill-Dosh. It does appear that it could be. The ailerons look similar to the ones shown in one of the pictures above. They are not like those on authentic an Curtiss.

sobrien wrote:According to the book "Orville's Aviators" in the chapter on Howard Gill, the original Gill-Dosh airplane was sold to and flown by Thomas Benoist. I Googled Thomas Benoist and found this picture that is supposed to be him flying the Gill-Dosh. It does appear that it could be. The ailerons look similar to the ones shown in one of the pictures above. They are not like those on authentic an Curtiss.

A good find!
Indeed they aren't! On the Reims machine the ailerons were extended to reach the first inboard wing strut. On earlier versions the ailerons were similar to these, but with rounded corners and a cut-out for the wing X-wires.

I noticed the flimsy look of the horizontal stabilizer. The ailerons don't look so sturdy either. The Howard Gill that built this is the same that wrote the "How to build a new Curtiss type" in the Magazine "Aero" in Dec. 1910. I didn't know that until I read "Orville's Aviators." Story goes that Gill and Dosh got permission to measure the Reims Racer when it was being displayed in the Wanamakers Department store in New York in the fall of 1909. I wonder why, if they measured the Reims machine they didn't copy the ailerons too. This would have to make the Gill-Dosh the first of the Curtiss copies. It also had to be a quick build to be ready for the Dominguez meet. I wish there were better pictures.

Users browsing this forum: No registered users and 2 guests